Running a marathon is much more than one day and 26.2 miles. It’s months and months of training, often filled with physical and emotional breakdowns. In a way, the same can be said of weight loss. Ask anyone who has struggled to lose weight, and they’ll tell you it’s more than a number. It’s a journey filled with sacrifice, letdowns, and determination. From an outsider looking in, these types of sacrifice can seem a little crazy, but there’s no denying how inspiring it is to see someone hit such a tremendous goal.

Then, you come across people like Lisa Swan who make you pause. Lisa, 49, has accomplished the unthinkable by losing more than 80 pounds, and today, she takes to the streets of New York to run the TCS New York City Marathon. At her heaviest, Lisa weighed more than 250 pounds. Today she is in the best shape of her life with more than 100 races under her (fuel) belt. 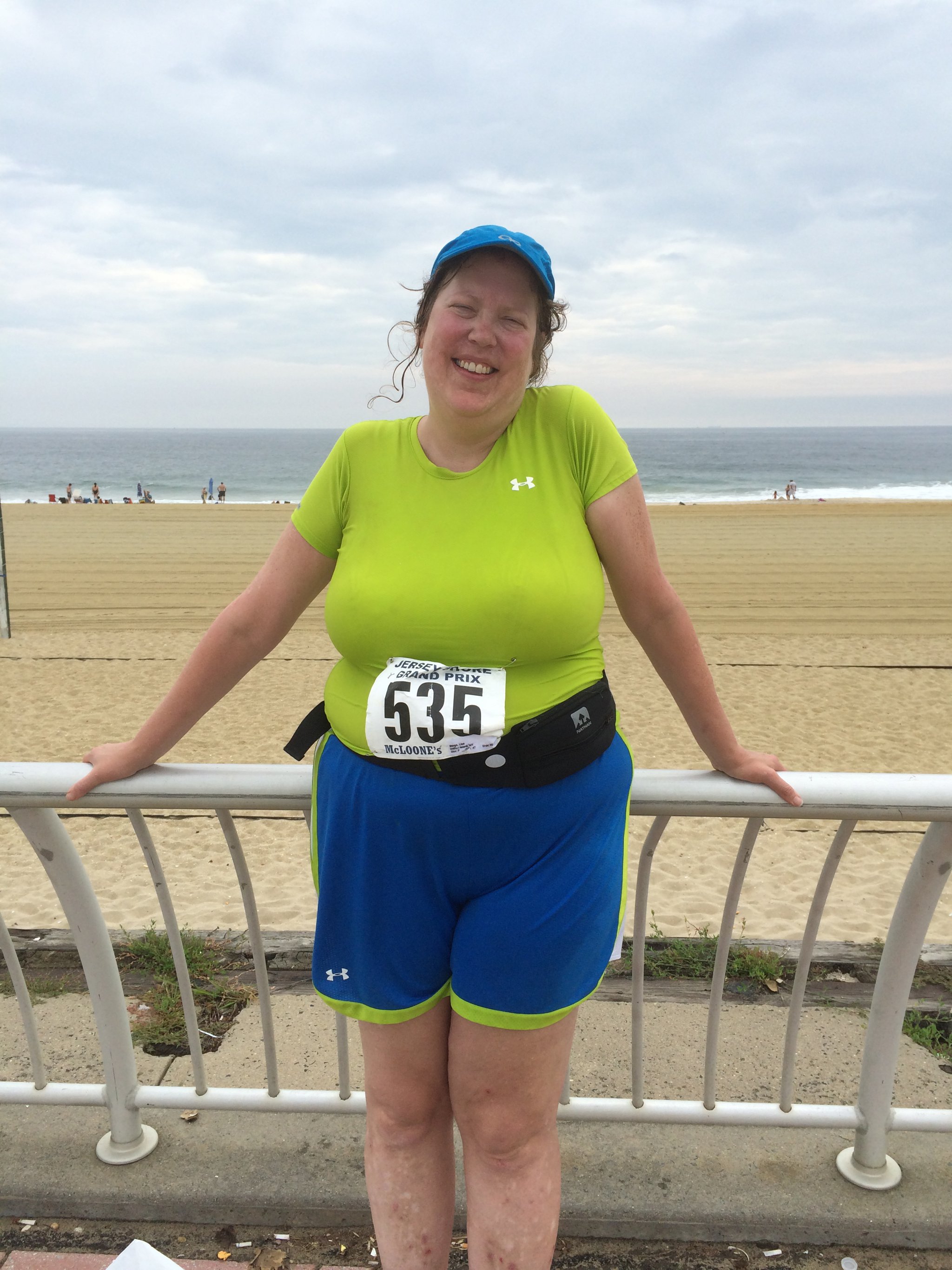 “Though training has been hard, I have to remind myself that fitness and endurance don’t happen overnight,” said Lisa. “It took me years to gain this weight so it might take years to lose it. I’ve signed up for many road races to keep my goals focused and I’m excited to run the New York City Marathon for the first time. I want to cross that finish line!”

We were lucky enough to catch up with Lisa over race weekend to learn more of her inspiring journey to the finish line.

POPSUGAR: What motivated you to pick up running?

Lisa Swan: A little over three years ago, I was over 250 pounds — at least 80 pounds overweight for my height. I was sick and tired of being sick and tired. So in early 2013, I got involved with an annual 10-week fitness program called the Staten Island Slim Down. Through them, I started doing mall walks. Then the Staten Island Athletic Club, a local running organization, invited us to check out a three-mile fun run in Clove Lakes Park that the club put on every week. Walkers were welcome as well as runners. It took me over 50 minutes to walk the [three-mile] course that Spring day, but I really enjoyed it. The walking was a “gateway drug” of sorts to running. It took me a while to build up the stamina to run, but once I started, I’ve never stopped. Since 2013, I’ve done over 100 road races — and counting! — including five half-marathons and two Spartan Races.

Related:
80 Pounds Down and Cancer-Free: How Zumba Saved This Woman’s Life

PS: What kept you motivated when you first started?

LS: I started with walking, and found that adrenaline started to kick in when I began doing road races, and I wanted to go faster. I’m still pretty slow, but persistence and training has made me a real runner. I also loved everything to do with runs: the tech t-shirts, the swag, the medals, the food, and sometimes post-race parties. So those were incentives for me to keep at it. It was hard, and I wore myself out, but the races made me want to keep doing it. It was the first time I ever found an athletic activity I enjoyed! 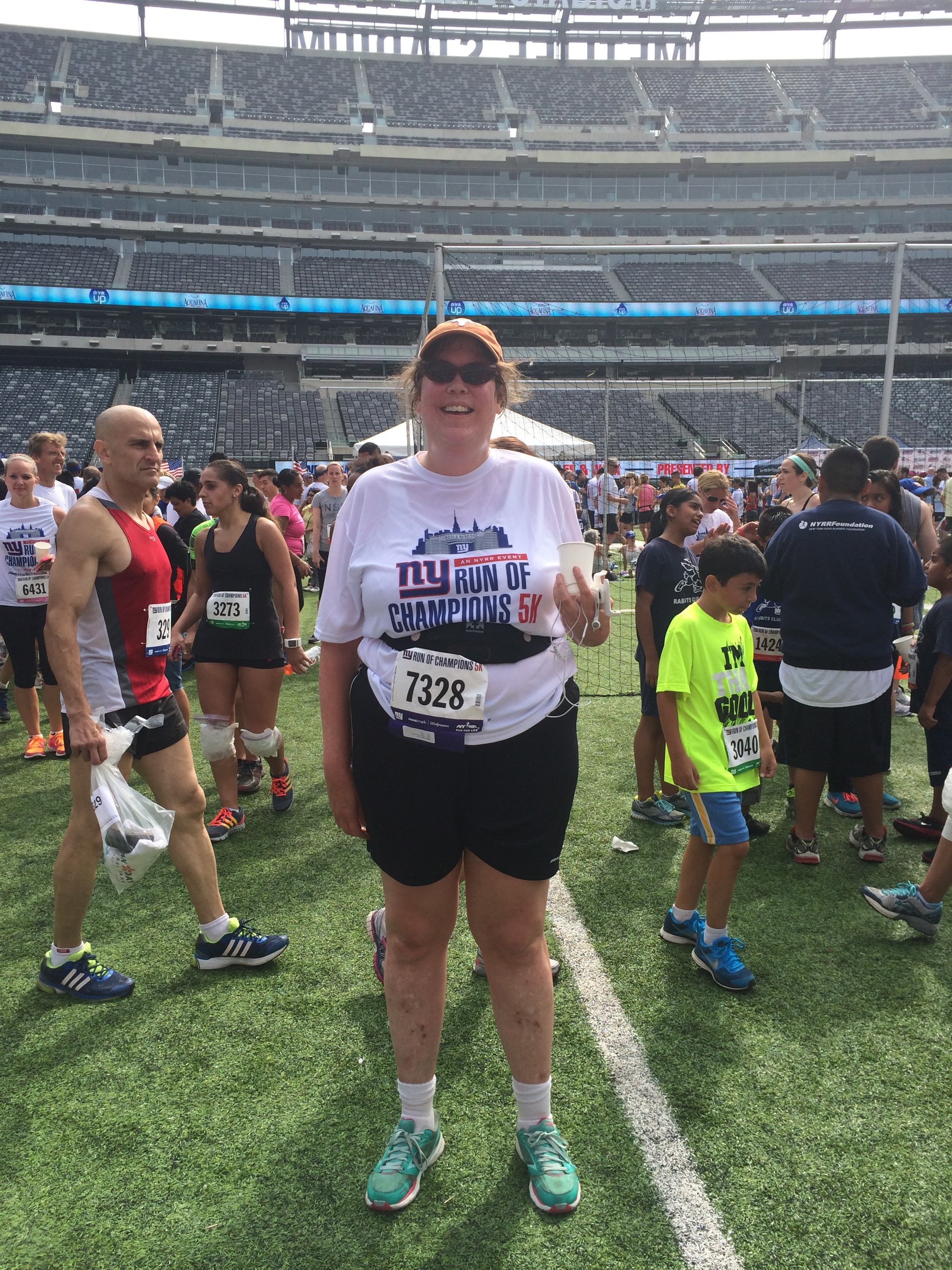 PS: Do you have any tips for someone who wants to run, but has never tried?

LS: Set goals for yourself. My first goal was to do a Spartan Sprint in Citi Field. Completing that 5K obstacle course race gave me the confidence to keep going. Since then, I’ve kept on setting goals, like my first 10K, first half-marathon, improving my times, etc. The key is to pick a goal that’s both audacious and realistic.

I would recommend joining a local running club. You can learn a lot from other members. One of the more experienced leaders in my club has been training me for the marathon. His steadfast belief in me, when I didn’t fully believe in myself, has made a difference. So has his marathon training plan. Running 20 miles or more four times in my training hasn’t just physically prepared me. It’s also mentally prepared me!
But at the same time, you cannot depend on doing your workouts with others. I’m still too slow to keep up with most of my fellow running club members, so I train by myself. Also, you have to be self-motivated. If the only way you’ll work out is with somebody holding your hand, you will fail.

You’ll also find that there are more people like you than you realize, especially if you do bigger races like those put on by New York Road Runners. Running isn’t only for those with the so-called “runner’s body.” I thought that only thin, super-athletic people ran. Once you get started, you will see runners of every age, weight, race, ethnicity, and socioeconomic status.

Related:
An 8-Week Plan to Make You a Runner 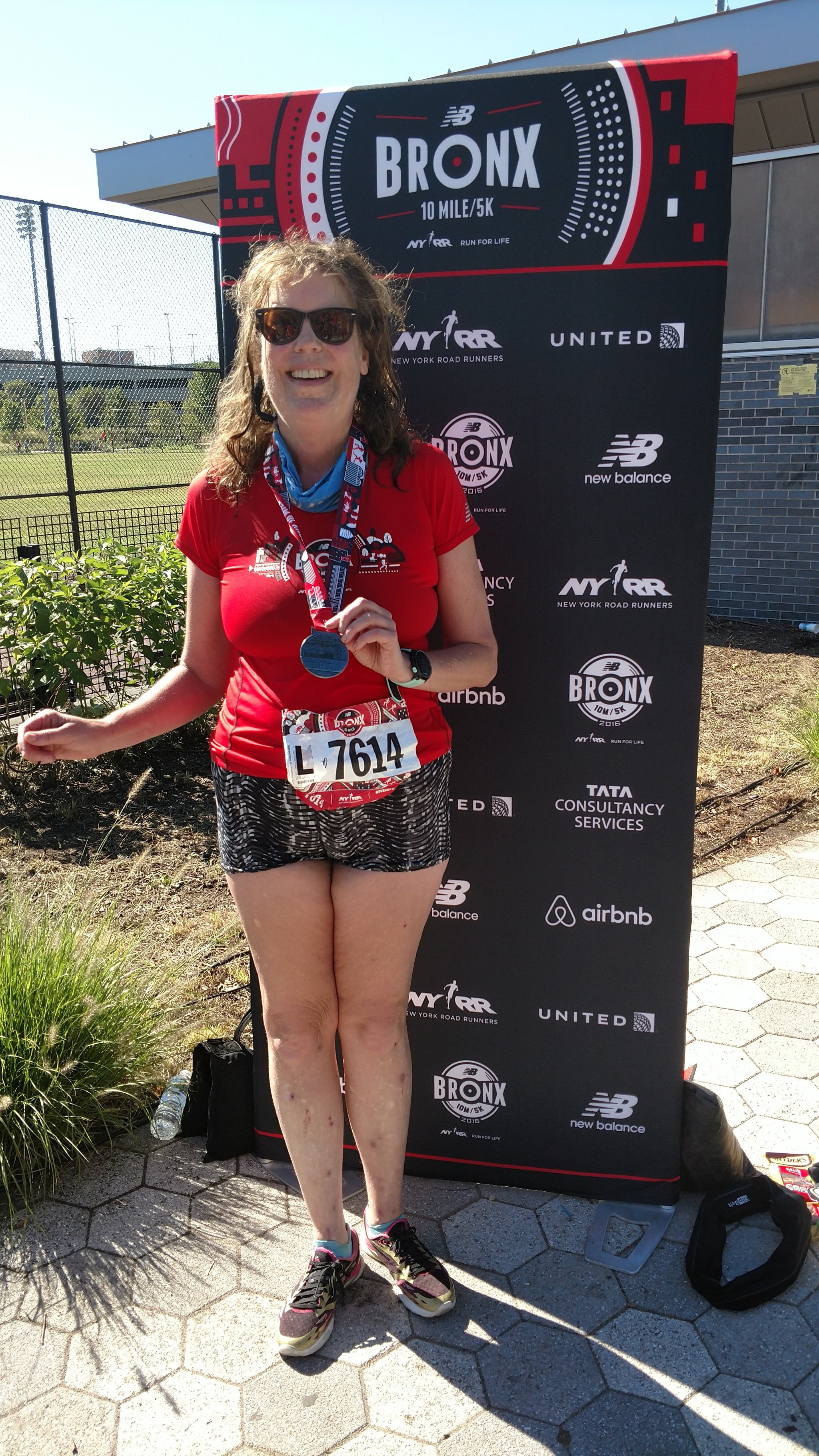 PS: How much weight have you lost and what difference has it made in your life?

LS: I’ve lost over 80 pounds, and would still like to lose another 15 or so. I wasn’t somebody who grew up overweight; I didn’t put on the weight until I quit smoking in 2005. So although I came from a family where my mother and sister are overweight, I had no idea how vicious people can be when you’re looked at as being fat. Or how sometimes people treat you like you’re invisible when you’re heavy, like you don’t matter. Or how even simple tasks like climbing stairs or walking down the street or standing for a long time can be physically exhausting when you are carrying a lot of extra pounds.

There’s a saying about how nothing tastes as good as skinny feels. While I would argue that a few things still do taste as good as that, the basic gist of it is true. I look younger and better and have much more energy now. It’s a pleasure to be able to shop in regular clothing stores again. And to wear things that draw attention to my figure, rather than hiding it. I also see myself as a warrior now, instead of the “sad fat girl” who was letting life pass her by. The physical and mental challenges I’ve gone through over the past few years in my fitness/weight loss journey have made me much stronger. While I still have my moments of doubt, I’m determined to keep on keeping on. And I’m looking forward to the race of my life this Sunday at the TCS New York City Marathon! 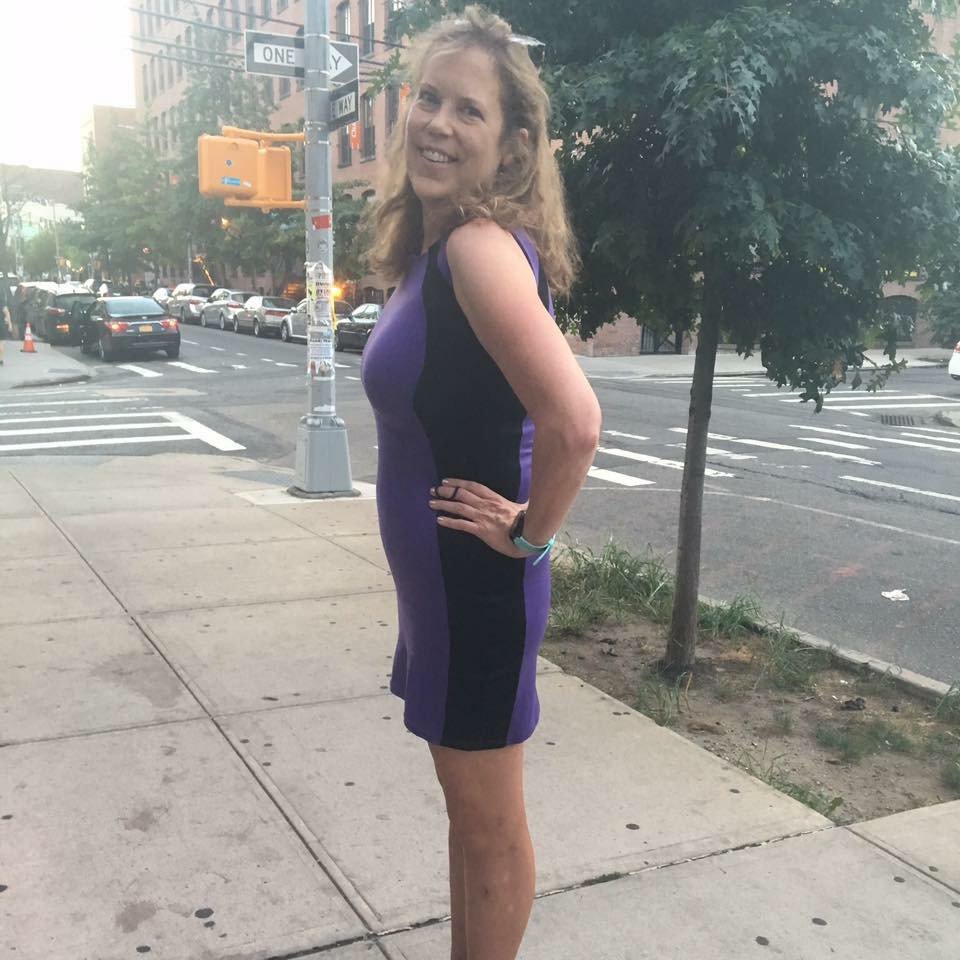 PS: What are some typical meals and snacks you eat to fuel your workouts?

LS: I usually eat a Thomas’ english muffin with peanut butter and a little honey in the morning before running. I like the Huma chia energy gels and the GU ones as well. The Honey Stinger waffles and energy chews are awesome, too. I also eat Luvo meals a lot for lunch. I try to eat a lot of protein, too, as well as carbs. Core Power shakes are the only protein shakes I’ve liked; they taste like a real shake, not chalk! Turkey burgers and marinated chicken thighs are a dinner mainstay. I like sauteing kale, onions, and peppers to go with dinner.

PS: What advice do you have for other women who are struggling with weight issues?

LS: While exercise alone won’t make you thin, it’s a necessary component for weight loss. It burns calories and boosts your spirits. And having a fitness goal makes you focus on eating the right things. When you start thinking of treating your body better, like you do when you focus on fitness, you’ll want to fuel better, and crummy processed food isn’t going to cut it.

That doesn’t mean I eat perfectly. When there is something I really want to eat that’s high in calories, like a chocolate chip walnut cookie from Levain Bakery, I’ll enjoy the heck out of it, but break it in half and throw the rest out before I get tempted to finish it all. The first few bites of any food are the best, anyway! Another thing I’ve learned is to not let a bad meal become a bad day, become a bad week. When I was overweight, if I ate too much in once meal and blew my diet, the overeating would carry on through that day and sometimes even the next. Now, I start back eating better on the very next meal.

Also, don’t get discouraged if you don’t lose weight right away. The best way to keep the weight off is to lose it slowly — no more than one to two pounds a week. 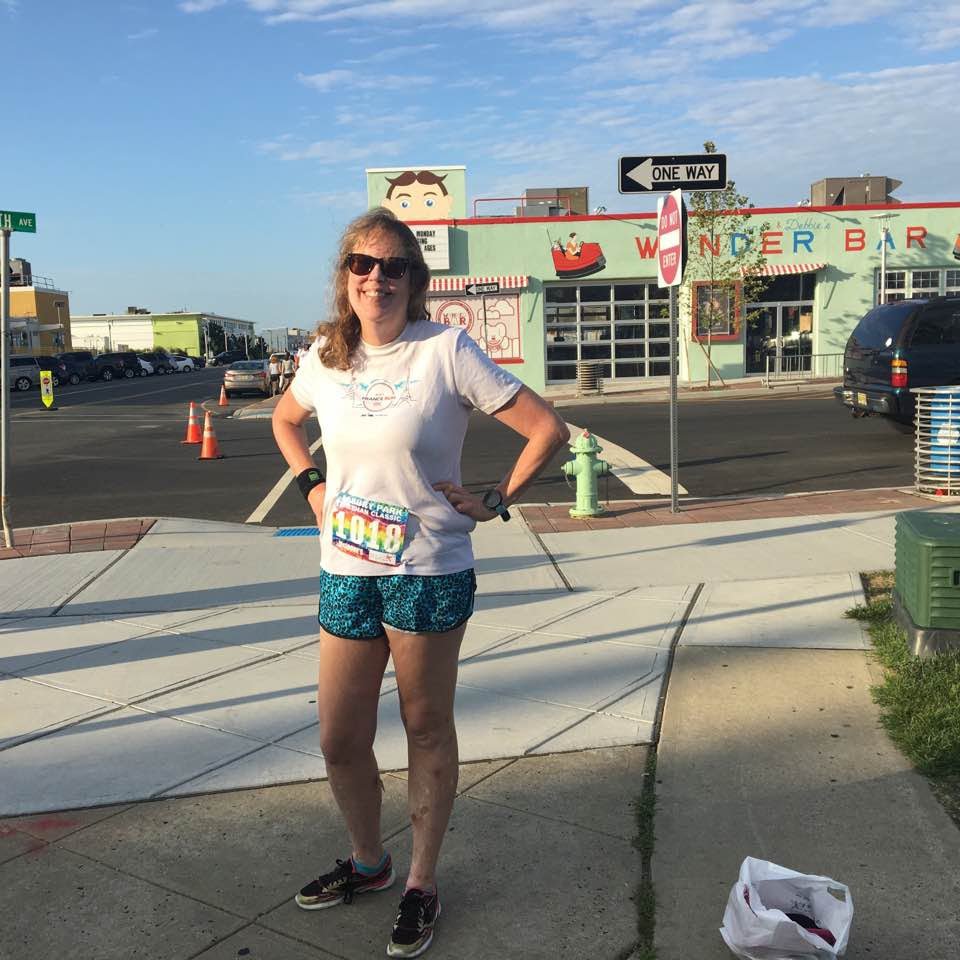 PS: What inspires you to keep going when you want to give up?

LS: I’ve gotten a lot of inspiration and encouragement from family, friends (both in real life and on Facebook), fellow runners, and co-workers. That has helped immeasurably. And the progress I have made has also kept me going. I keep some of my “fat photos” on my phone to remind me of how far I’ve come and to keep me from backsliding. Also, writing publicly about my journey, like in my baseball blog, has given me an outlet to talk about the highs and the lows.

PS: Do you have a goal for the NYC Marathon?

LS: My coach said that he doesn’t care if it takes me seven hours, as long as I finish. I have run a half-marathon at 2:43:08, but I’m not sure when I will finish the full marathon. I’ve been told, by my coach and others to not set a time goal, but to just do my best. However, I do want to finish before the race is over and the finish line is taken down!